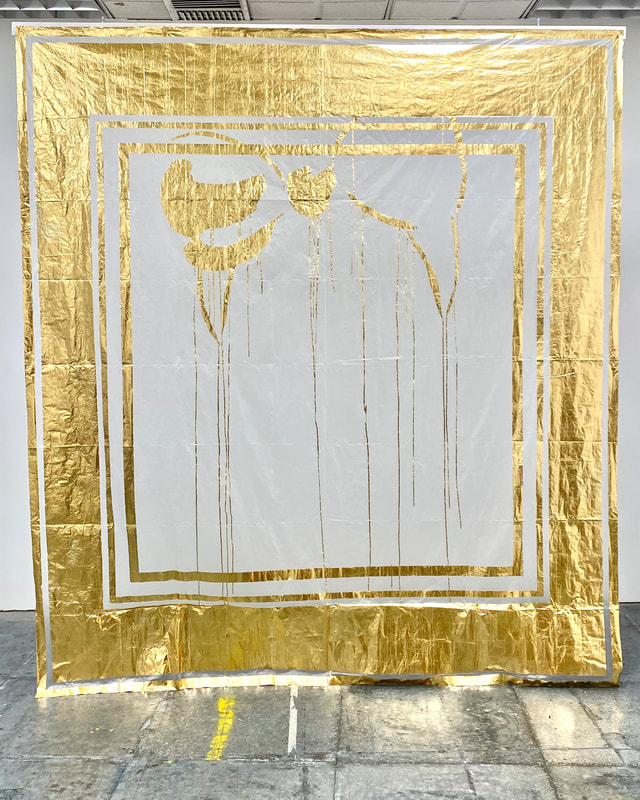 Four gilded gold rectangles outline the painting whose scale is equivalent to a double flat bedsheet. These borders echo those of Russian Orthodox icons, for which multiple frames and outlines serve to underscore the icon’s role as a portal or window to sacred spaces. In place of a haloed figure, a giant bow sits in the upper portion of the painting, intersecting the borders in parts. The bow motif is a reference to the popular feature of a bow headband in many selfie filters, which amongst other superficial alterations to a user’s appearance, superimpose often oversized bows on the selfie-taker’s head. In icons, it is common for aspects of the image to overlap the icon’s painted borders to indicate the possibility of the divine on earth. In Veil (Bow Headband) the overlapping of the bow motif and the gold borders indicates the overlapping of on- and off-line life. The central space of the painting is mostly empty, allowing the blurred figures of anyone or anything moving behind the painting to be indistinctly visible; the semi-transparent quality of the polythene providing a visual metaphor for our own online presence and the omnipresence of the digital.